Proteostasis is the dynamic regulation of protein homeostasis, where all the cellular pathways govern the production, folding, trafficking and degradation of proteins. Pathways to ensure proteostasis in different subcellular compartments are defined as unfolded protein responses (UPRs), which have evolved in the cytosol as cytosolic heat shock response (HSR), endoplasmic reticulum as UPRER and mitochondria as UPRmt.

As a trusted CRO, CD BioSciences provides a comprehensive panel of solutions covering all aspects of life science research, including proteostasis & UPR.

The endoplasmic reticulum (ER) is a continuous membrane system within the cytoplasm of eukaryotic cells. It is an important site for the synthesis, folding, modification, and transport of proteins. Perturbation of ER homeostasis through the accumulation of unfolded or misfolded proteins results in a stress condition, i.e., ER stress, and activates unfolded protein response (UPR). ER UPR (UPRER) instigates transcriptional and translational responses to relieve ER stress.

PERK is a serine/threonine kinase that regulates the translational response of ER UPR. PERK is activated after dissociation of ER chaperone BiP (GRP-78), which leads to the phosphorylation of eIF2α and attenuates global protein translation. A subset of mRNAs, such as ATF4 and ATF5 escape the mechanism of translational inhibition to support cellular anti-oxidative response, facilitate autophagy, promote the transcription of ER chaperones , and drive apoptosis if necessary.

IRE1α possesses both a serine/threonine kinase domain and a distinct endoribonuclease domain. The dimerization or multimerization of IRE1α after dissociation of GRP78 leads to its trans-autophosphorylation and activation. Through its endoribonuclease domain, activated IRE1α has the propensity to cleave and degrade selected mRNAs and microRNAs in a process termed regulated IRE1-dependent decay (RIDD), and consequently reduce protein translation. An alternative mechanism of IRE1α action involves the splicing of XBP1 mRNA to yield an active transcription factors XBP1s which regulates the expression of genes functioning in protein folding. The transcription of XBP1-dependent genes improves the protein-folding capacity of ER and thus relieves ER stress.

In the third axis, ER stress triggers the dissociation of GRP78 from ATF6, which leads to the relocalization of ATF6 to Golgi apparatus and it gets processed by S1P and S2P protease to generate ATF6f (p50). ATF6f is a bZIP transcription factors which migrates to the nucleus and regulates the expression of genes involved in ER homeostasis. 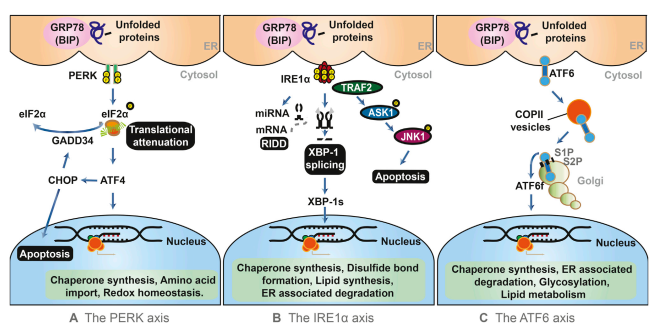 Pathways of the UPRER (Binet and Sapieha, 2015)

Similar to ER UPR, the mitochondrial unfolded protein response (mito UPR or UPRmt) is a stress response triggered by the accumulation of deleterious mitochondrial genomes, unfolded or misfolded proteins or damages from reactive oxygen species (ROS). The signaling pathway of mito UPR is first characterized in C. elegans, where ATFS-1 plays a pivotal role. In mammals, the signaling transduction of mito UPR is mediated by transcription factors CHOP, ATF4 and ATF5 (a functional ortholog of ATFS-1).

Our solutions for UPR research include but are not limited to the following.

Investigating into the mechanism of regulation of certain regulators.

Analyzing the cellular phenotypes regulated by genes/proteins of interest.

CD BioSciences offers cost-effect, high quality and hassle-free UPR related research solutions to our clients worldwide. We guarantee to deliver our products and results on time. Please feel free to contact us.