Cell death is a fundamental biological process, which has been extensively explored in the past several decades. Active cell death (apoptosis, necroptosis, pyroptosis ferroptosis, alkaliptosis and oxeiptosis) are tightly regulated by signaling pathways.

Since cell death is closely linked to diseases, the in-depth characterization of cell death events may uncover novel therapeutic targets. As a trusted CRO, CD BioSciences provides a comprehensive panel of solutions covering all aspects of life science research, including cell death.

In multicellular organisms, cell death is a process that a cell ceases to function. It is critical for maintaining tissue homeostasis and eliminating potentially harmful cells. Though, cell death can be caused by overwhelming damage, most happen as a consequence of specific signaling events.

Characterized by distinct morphologies, apoptosis, autophagic cell death, and necrosis are three major types of cell deaths. They are executed through different, but sometimes overlapping, signaling pathways in response to specific stimuli.

Apoptosis or Type I cell death, is the process of programmed cell death, which is characterized by cell shrinkage, membrane blebbing, global mRNA decay and condensation of the chromatin (pyknosis). It is also defined as cell death accompanied by activation of caspase protease. The major signaling pathways triggering apoptotic cell death are the mitochondrial (the intrinsic) pathway and the death receptor (the extrinsic) pathway.

Apoptosis is a vital component of various processes such as normal cell turnover, immune response, and embryonic development. Inappropriate apoptosis has been linked to many human conditions including neurodegenerative diseases, ischemic damage, autoimmune disorders and many types of cancer. 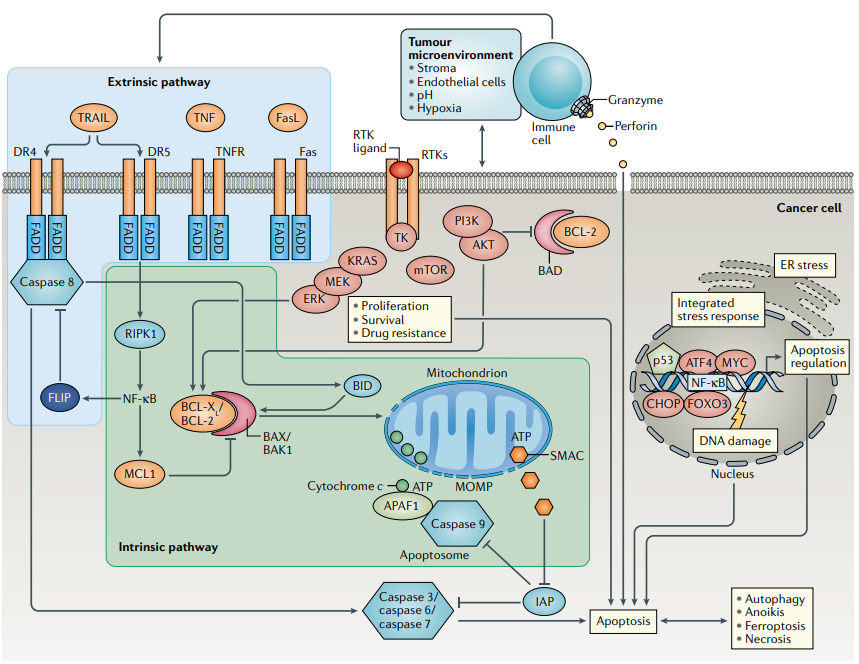 Autophagic cell death (ACD), or type II cell death, engaging the autophagy machinery, is characterized by the formation of large intracellular vesicles. Autophagy, also referred to as Microautophagy, is a well-defined catabolic process engaged in response to metabolic crisis or to damaged cell component removal. Autophagy accompanies type II cell death without promoting it in most scenarios. However, there are cases in which it appears to participate in cell death, such as the involution of the salivary gland driven by autophagy-dependent cell death during Drosophila metamorphosis.

Autophagy is associated with physiological as well as pathological processes such as development, cell differentiation, infection and cancers. Emerging evidence suggests that ACD is implicated in several aspects of mammalian physiology and psychological disorders.

Previously, necrosis was considered an uncontrolled form of death occurring as a consequence of infection or injury, but it is now recognized that at least one pathway of active necrosis exists. To reflect the nature of regulated necrosis, it is referred to as "necroptosis", in which receptor-interacting protein kinases 1 and 3 (RIP1 and RIP3) play key roles. Besides RIP-dependent necrosis, there are other forms of necrosis signaling, however, none of which have been fully characterized.

Other Forms of Cell Death

Recently, there are many other forms of cell death discovered, including mitotic catastrophe (cell death due to premature or inappropriate entry of cells into mitosis), ferroptosis (an iron-dependent form of cell death) and pyroptosis (a highly inflammatory form of programmed cell death).

Accordingly, too little cell death leads to the development of catastrophic diseases such as cancer and autoimmunity diseases, and too much cell death leads to degenerative diseases. Thus, a better understanding of each type of cell death is needed for both basic research as well as medical purposes.

Our solutions for cell death research include but are not limited to the following.

Studying the molecular function of a certain regulator in cell death signaling pathways.

Investigating into the mechanism of regulation of a certain regulator.

Analyzing the cellular phenotypes regulated by gene/protein of interest.

Identifying and characterizing the types of cell death under certain conditions.

Screening inhibitors or activators of certain types of cell death.

CD BioSciences offers cost-effect, high quality and hassle-free cell death related research solutions to our clients worldwide. We guarantee to deliver our products and results on time. Please feel free to contact us.