When the patent of an innovative or branded drug is about to expire, a pharmaceutical company or generic company can submit an abbreviated new drug application (ANDA) for generic drug approval. Generic drugs refer to products which are identical to an innovative or branded drug that has an NDA approved by FDA. To be specific, the active ingredients, route of administration, strength, conditions of use and dosage form of these drugs are therapeutically equivalent to the innovative or branded ones. Companies need to submit both evidences of bioavailability (the relative amount of drug from an administered dosage form which enters the systemic circulation and the rate at which the drug appears in the systemic circulation) and bioequivalence (its extent and rate of absorption has no statistically significantly difference from those of the reference product when administered at the same molar dose) to FDA for the approval of generic drug products. In clinical evaluation of the therapeutic equivalence of drug products, bioequivalence assessment is considered as a surrogate.

Usually, crossover design is recommended to a single-dose or multidose bioavailability study. But if there are valid scientific reasons saying it’s more appropriate, a parallel or other design would be recommended (Figure 1). As a result, researchers often use a standard two-sequence, two-period (or 2×2) design for a bioavailability or bioequivalence study in practice. Generally, the test product and the reference product are represented as T and R, respectively. So, we use (TR, RT) to express a 2×2 crossover design (TR refers to the first sequence of treatments and RT refers to the second sequence of treatments). In another words, qualified enrollments would be randomly assigned to sequence 1 (TR) and receive the test product first. After a sufficient length of wash-out period, they would receive the reference product as a cross-over. On the contrary, those who are randomly grouped to sequence 2 (RT) would receive the reference product first and then experience a sufficient length of wash-out period to receive the test product as a crossover.

However, there are limitations of the standard 2x2 crossover design. It cannot estimate intra-subject variabilities independently because all subjects only receive the same treatment once. If researchers focus on assessing intra-subject variabilities, other design strategy would be recommended instead of crossover design when comparing two drug products, namely Balaam’s design (TT, RR, RT, TR); two-sequence, three-period dual design (TRR, RTT); four-period design with two sequences (TRRT, RTTR); and four-period design with four sequences (TTRR, RRTT, TRTR, RTTR). These study designs are also known as high-order crossover designs whose number of sequences or the number of periods are greater than the number of treatments to be compared (shown as Figure 2). 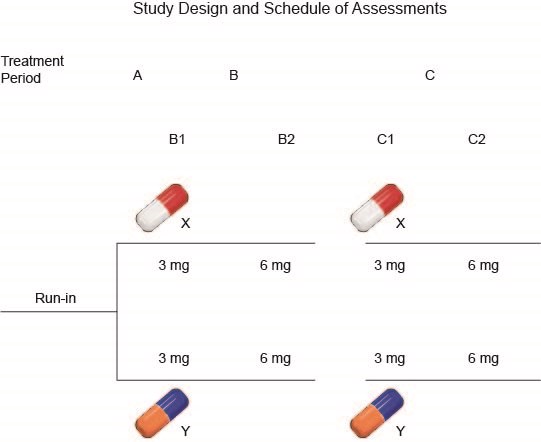 All in all, the bioequivalence studies should be designed to provide an objective means of critically assessing the possibility of alternative use of two drug products. So, before regarding as interchangeable, there must be therapeutical equivalence between two products containing same active ingredients and marketed by different licensees.

At CD BioSciences, we can help you not only the bioequivalence study design but also the appropriate choice of statistical strategy. If you have any questions, please feel free to contact us.